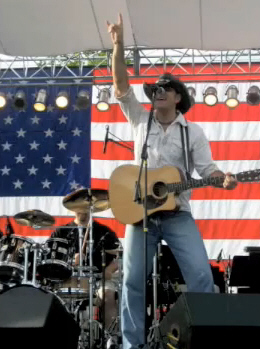 Chance brings us his blend of Country music with some 90’s Rock, 60’s Motown and Heavy Metal influences.

He is a product of Lolo, MT (Bitterroot Valley) and is a self-taught guitar player/singer/songwriter. Who knew the country music your mom and dad used to listen to would transform into the all-encompassing genre of music it’s become today?

Check out his videos on CMT!

In December 2009, Chance won Country Music Television’s search for the #1 “unsigned” artist in the nation taking home the Music City Madness title with over ONE MILLION VOTES in the final round alone.

He also traveled to Nashville (just before the floods) and filmed a World Famous CMT Studio 330 Session that aired in July and August (while on tour with Blake Shelton and Luke Bryan) on CMT.

Even more about Chance McKinney

It All Adds Up For Math Teacher Chasing His Dream
Be Real? It doesn’t get any more real than Chance McKinney

At 6’6″, he’s not only heads and shoulders above his classroom of kids, but this self-taught singer/writer/picker is a stand-out among entertainers throughout the Pacific Northwest and beyond.

The “Math Teacher by day, Country Entertainer by night” isn’t a tale often told in media circles. How do you go from a week on tour with Blake Shelton, Luke Bryan or Dierks Bentley to teaching trigonometry and pre-calculus? There’s only one guy who would know the answer to that question. Chance is the epitome of a country song – struggling to make a dream come true while raising a family and working to pay the bills.

This West Coast underdog is out to prove country isn’t only a “Nashville thang.”

“I was always a big kid – a little taller, a little more clumsy, a little more chunky and a lot slower. So, I found myself always bein’ made fun of and being told I just wasn’t going to be good at anything. Kids are cruel sometimes, but teens and adults can be downright vicious. I’ve spent a large portion of my life tryin’ to prove folks wrong.” – Chance McKinney, CMT’s Next Superstar

Current Season | Get Tickets | The Stage

Rent the Stage and Field for your special event!
The Linger Longer Outdoor Theater is located at 151 East Columbia Avenue where Center Road and Highway 101 meet in Quilcene.
FIND OUT MORE